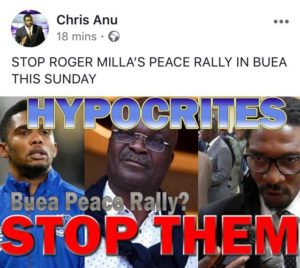 The IG Communications Minister Chris Anu has called for a complete boycott and Stop of a peace Rally organized in Buea tomorrow Sunday the 10th of December 2017 by great football icons.

In an audio released on this subject, Mr Anu argues that these players have never condemned any killings perpetrated La Rep Regime but Samuel Eto was quick to go to Libya to liberate the few Francophones from slavery.

The IG Minister for SCs has called for these sports men and women to organize these peaceful rallies first in la Rep regions condemning the atrocities of the regime in Southern Cameroons.