The Hand writing was very clear in the wall and in Capital letters that president Biya was going to use appointments inan attempt to appease the Anglophones in the on-going crisis. President Biya today appointed by decree as usual 15 man to on the newly created National commission on Bilingualism and Multiculturalism, 4 women and 11 men. Out of the 15 men appointed, 6 of them are Anglophones. Peter Mafany Musonge to chair the commission. 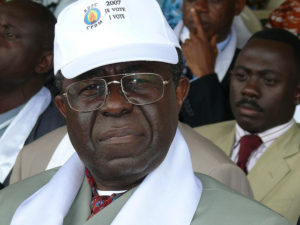 The appointment referred by analysts as controversial has met with many critics, as many can now clearly see the mission of former PM Mafany Musonge who led the South West Vs North West attack (Xenophobia) following the game if his grand master “Divide and Rule” aimed at rewarding him as the President (Chairperson) of the committee. He must have played his cards well. 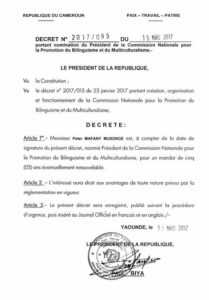 Another controvesial appointment is that of Ngwane George, member of the banned consortium. This comes not only as a shock to Anglophones but rather contradictory. Some think they regime has gone mad in its rule, appointing a banned member whose colleagues are languishing in jail for the same struggle.

The coming back of the Meta lady Ama Tutu Muma is also welcomed with mix feelings. Ama being the youngest female of the kids of S.T Muna who faces some opposition from his brothers in politics served as a very disrespectful Minister under PM yang head of goverment. This appointment will serve as another slap on PM Yang who might thought to have sanctioned her. But does the PM possess and exercise any powers in cameroon? He is just a figure head. 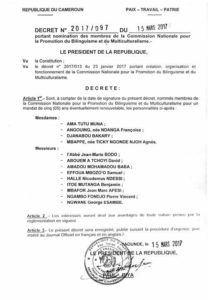 Mafany shall be assisted as chair by Oumarou Djika Saidou. 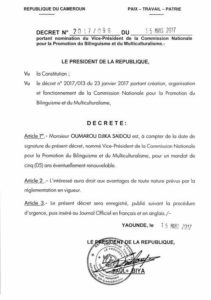 The president seems really consistent as someone mentioned last time, he keeps falling in the same pit. His decrees are signed in the French langauge and a decree of this magnitude would have been a good example to carry the English language. Although the Anglophones are not facing a langauge problem alone, they think that the president still does not understand the reason for the strike, else he would not use appointments as means to appease the anglophones by appointing the same people who have been ministers into the commission.

Did we miss Niko Halle? His own case speaks volume for his role during the strike. The message is very clear here; stand in public and talk against the Anglophones and you are served with a lucrative position that has no value. This commission is created simply to squander tax payers’ hard earn money just as the Senate was created to do same.

Who is really deceiving who?