It was the second time as the presidential couple, Paul and Chantal Biya met with the Pope today in Rome. The Pope granted President Paul Biya a 30 minutes audience. The Two leaders discussed the role the Church plays for the development of the country, especially in the fields of education and healthcare. 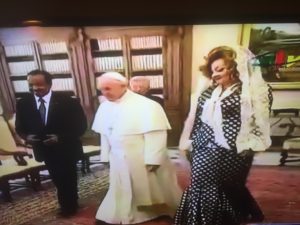 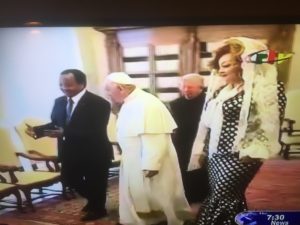 We learn from a statement released by the Holy See Press Office, that the discussions were cordial, and highlighted the good existing relations between the Holy See and Cameroon.

The Zenith reports that they spoke about the importance of favoring national cohesion, whilst giving precedence to the richness of various historical and cultural traditions of the country, in respect for human rights and the rights of minorities.  The President later met with the Vatican Secretary of State, Cardinal Pietro Parolin, and Secretary for Relations with States, Archbishop Paul Richard Gallagher. 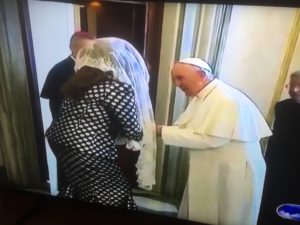 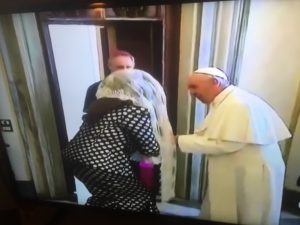 Our First lady Chantal Biya was seen performing the Bidoung Pkatt “Challenge” or call it “Chantou Challenge”  when she bowed as deep as she could to kiss the hands of the Holy Father. A gesture that shows her humbleness and uniqueness. A natural woman who never forgets her background even as seen from her steps as she is always being ushered and easy to miss them.

This visit to the pope by the head of state has been interpreted by some analyst as a ploy to get Pope Francis to visit Cameroon as his predecessors St Pope John Paul II twice and Pope Benedict xvi.