‘If by end of Monday 5th February 2018, no video footages of the Anglophone leaders are seen, La Rep Du Cameroon will hear from the IG.’ Chris Anu 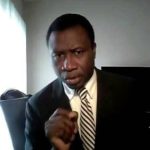 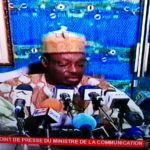 Chris Anu Beats Isa Tchiroma pants down in an interview granted today by The Voice of America over the fate of the Anglophone leaders. Chris insists that the Monday ultimatum holds and that if after this day the evidence about the whereabouts of the arrested leaders is not seen with video footages, Cameroon will hear from the IG. He says this might not necessarily happen today but after today. He backs his claims with the atrocities carried out in the people saying that it is not heard of in the world that people are arrested and it takes a month without anything known about them.

Isa in his part could only repeat the same song, ‘Anything we are doing is according to they law, they are alive and are being taken care of, we will not succumb to threats as a government…’ went ahead to claim these secessionists have killed about 20 Gendarmes . Must this man always lie?

He went ahead to vindicate Ngah Christian of the Guardian post who was stopped yesterday by Joe during the press hour from using the word extradition but that Anglophone leaders were deported. When Ngah tried to argue that He did not have to use exact words, Joe hammered stating that Isa never used them. Today he used to very clearly and even claiming that Nigeria and Cameroon do have some conventions on that. He will surely put Nigeria into more trouble as more evidences will be demanded . Well we know they are hiding behind the Boko Haram deal to blackmail each other and the Biafra struggle which Chris already taught them the difference.
In fact Chris gave Tchiroma and la Rep a lesson on that interview.

The journalist himself knew his job. He gave Chris hard questions but got convincing answers while Tchiroma was challenged to produce the leaders of face the wrath of the people later when the consequences arrive.