The PM ended his tour in the North West today in Kumbo at the council Hall starting with Nkambe this morning. In Nkambe, he urged the religious leader to play a major role for the schools to reopen. In Kumbo he wondered how two people who have never ruled a village could rule a country.

The PM Yang kept Nkambe people thinking out loud when he challenged the Religious authorities to fit a date for schools to resume. This contradicted the announcement made several times over the CRTV, the GCE Board and by the Minister of Secondary Education etc on the effective start of school last Tuesday 7th if they are yet to resume.

In kumbo, the population came out unlike the ghost town announcement that circulated online. The people of Nso now referred to as warriors defiled all odds to face the bullet on the chest by coming out to face the PM face to face. 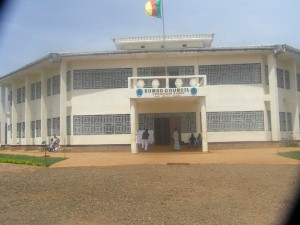 Unfortunately for them, they were never given the chance to err their grievances as only 5 people were allowed to speak at the Hall. These speakers referred to as CPDM members are said to have spoken in terms of speech reading. The SDF MPs and Mayors who sat infront of the PM and at the Front seats despite having their hands raised through out were never picked.

The MP for Kumbo Hon. Banadzem Joseph and the Kumbo council Mayor Mr. Njong Donatus were more disappointed as the population as their voices were not given the chance, neither was the Mayor given the chance to welcome the PM.

In The PM’s speech, he wondered how people could listen to two young guys who sit abroad and have never ruled a village could rule a country. He said one was in the Belgium while the other in USA; he was referring to Mark Bara and Tapang Ivo respectively who have used the social media to maintain the ghost town and strike successfully.

The PM hailed the Bui people for their intelligence and challenged them to send their children to school to maintain and promote the continuation of this talent. He reiterated that the internet could not be returned so soon and that it was cut off to investigate those spreading false information. that there demilitarization could not take effect and that those arrested could not be released until judged and things came to normal.