Dear President Paul Biya, Everyone knows that the arrests of Barrister Balla and Supreme Court
Lord Justice Ayah Paul were affected without due process of the law. In speaking out and
leading, these lawyers did just what lawyers do best in their careers and for their communities? 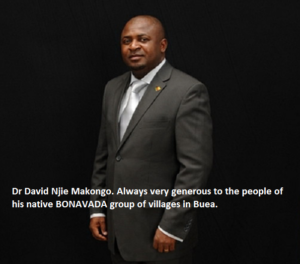 Then came the summons and interrogation of Barrister Akere Muna for expressing his personal views about your end of year speech. For a country that prides itself with freedom of expression and association and respect for the rule of law, these arrests, detentions and trials have put a serious dent on national unity and national integration that you hold so near and dear to your heart.

Your Excellency, what these three men I have cited above have in common is that they all come from Southern Cameroon, they are all well respected national and international lawyers and have all expressed only views related to their profession that affect not only their lives but also the lives of millions of their English speaking communities.

But today they are being charged and or threatened to be charged with terrorism and treason. Both charges come with a death penalty looming over their heads.

Sir, people are asking where have these three lawyers gone wrong? If extraordinary men of their magnitude could be treated like puppets would, what would this regime not do to thwart and hurt the ordinary Southern Cameroonian?

It was only a few days ago that Your Excellency stated in Italy that speaking of federalism is a taboo and definitely there will be no dialogue if federalism is what Anglophones want.

Sir. The problem with this statement I’m afraid is that, 90% of the people from Southern Cameroon no longer want to stay in the union, largely because of torture and marginalization.

Due to wanton human rights abuses and Internet blackout, over 90% Anglophones at home and abroad now want separation and outright independence, (if I’m lying to you try a referendum Sir in the two English speaking Regions). Now discussing federalism around some of our people is fast also becoming a taboo.

As a leader and the father of the nation, Mr. President, you have to be fed the truth. Yet i’m worried no one around you who has your ears is willing or courageous enough to tell you this. Not even foreign friendly nations. It’s rather unfortunate!

Now we have a deadlock situation where no one side is willing to shake or shift their goal post for dialogue to genuinely begin and give our people the peace, prosperity and liberty every one of us deserves.

The regime appears to be placing it’s bets on the army and the courts to silent all forms of expressions by Southern Cameroonians.

On the other hand, effective ghost towns and close down of schools have persisted despite numerous trips by the PM to the regions and continues arrests. But no one seems to face the truth as to why our people have still not given up and it is your right and place Mr. President to know.

Your excellency, order the courts to stop all these trials. Authorize the prisons to release everyone and all these leaders without conditions. Command the forces of law and order to stop the arrests. Instruct CRTV to hold off on all forms of media propaganda on this issue! In so doing you will diffuse tensions.

In the higest interest of peace, liberty and freedom, Your Excellency, permit me use this opportunity to respectfully request for audience aimed at telling you the whole truth and handing you a road map for genuine dialogue as my own modest contribution towards peace and finding lasting solutions to this problem.