There is an unofficial letter circulating all over social media supposedly written by The Bar President Jackson NGNIE KAMGA esq and stated that it is done in Douala and not in any of the Anglophone area. Below is the soft copy of it without any letterhead, neither a stamp nor a signature. 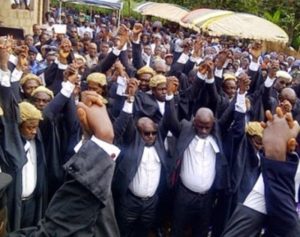 Following the extraordinary Bar Council meetings held respectively in Buea and Bamenda on the Saturdays 18th and 25th March 2017, which meetings were immediately followed by working sessions between lawyers of the two Anglophone regions and the Bar Council,

It was recommended that a unique framework comprising of very senior advocates from the North West and South West regions be set up to reflect on the way forward.

By The Bar President Decision No N° 038/BOABC/ADM/03/17 of 31st of March 2017, a conclave of senior advocates of the North West and South West regions to which some junior colleagues were integrated to elaborate the modalities of the way forward, was set up with the missions of making proposals on the way forward.

Mindful of Government’s response to the demands of the Anglophone lawyers as announced by the Minister of State in charge of Justice ,during his press conference of the 30th of March 2017 , and the creation by the Minister of Public Services of an adhoc committee in charge of organizing the special recruitment of Common Law magistrates and judicial officers,
The conclave unanimously came up with the following recommendations:

1- That the President of the Bar Association is hereby authorized to enter into dialogue with the Government on matters bearing on the Common Law Lawyers.

2- That Advocates of the South West and North West regions shall resume work on the 2nd may 2017, for the resolutions of the ad hoc committee submitted to the Prime Minister and approved by the Head of States to be fully implemented

3- That this conclave shall be convened on the 30th July 2017 to evaluate progress made on the implementation of these resolutions.
On behalf of the Bar Council, the Batonnier sincerely thanks his colleagues of these two regions for this renewed confidence bestowed on the ruling organs of the Bar Association.

He especially thanks the members of the conclave who made enormous sacrifices and walked the extra mile to ensure the normalization of our activities.

He is mindful of all their recommendations, and announces that the lawyers in the North West and South West regions will resume work on the 2nd of May 2017.

He pledges to continue negotiations with the Government in order to satisfy the demands of the common law lawyers as well as the release of our two colleagues currently under detention in Yaoundé.

In the days ahead, the Batonnier, with a delegation of Bar Council members will travel to Buea and Bamenda to meet the heads of these jurisdictions in order to discuss and define concrete modalities for the resumption of work.

The Batonnier stresses that the return to normal is the fruit of dialogue between the Government and the Bar Association, dialogue which should be perpetuated and reinforced in a determined and responsible manner

The copy of this letter in French is also presented by Cameroon-info.net on the link here:

Comments gathered from many groups state that if such a letter were valid, it would have fallen short of its legitimacy as it comes 9 days earlier to the awaited Judgement of the colleagues in jail. It is interpreted by many as the highest state of treason, as the terms for dialogue based on the release of arrested, return of those on the run, re connection of the internet, demilitarization of the regions and possible promise of no further arrests have not been fulfilled and respected. What about invitation of the third party to the dialogue?

To have taken such a drastic turn of events based on the press release from the Minister of Justice is seen as the Minister’s  ploy to play the similar game by the Secondary Education minister who went around convincing various trade unions to sign press releases calling off strikes that never was called off. Is Jackson Kamga therefore the right person to call off the strike? And why from Douala? This would have been a big victory to the Government and the National TV would have stopped any other program to broadcast and celebrate such victory. Why have they not? Propaganda?

On the 27th of April, the fate of 28 Anglophones shall be decided by the Military court. Shall this decision hasten their release or shall the case again be adjourned to hold those calling off the strike responsible in case it does not effective halt. ? Why is the date of the return to Courts announced only after the 27th of April? Mere coincidence or based on “Good Faith” judgement? Remember the crimes they are allegedly accused of are  secession, vandalism, propagation of false information, terrorism among others will be held against the 28 persons.

What are the reasons of others on this controversial letter?

Jonathan Taphe, refused to succumb to such a letter and that the only letter that could be taken serious would be that from The president of the Common Law bar Bobga Harmony. This same Lawyer  is on exile in USA. Ngeh Samuel calls on Anglophone lawyers to confirm this as according to him common Law lawyers do not behave unprofessionally. Atali Dickson believes only Barrister Agbor Balla has the mandate to deliberate on this and that it is unacceptable. He goes further to refer to  it as “waste of time” and that this can not be accepted.

Ambo Ben, Gejung Mildred, Teneng Rogers and Sylvia Cavl, mock at the release, asking where the Bar president was when the leaders of the Consortium were jailed. They call this baseless as the venue of the release defeats the purpose.

It is all interpreted as the Regime’s ploy to see the reactions of the Anglophones as a measurement of calculating their next move. Could it be a way to state that all those arrested shall be set free on the 27th of April at last?

With the assertion that “impossible n’est pas Camerounais” your guess will be as right as mine.