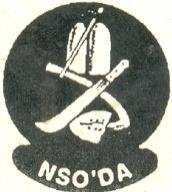 After fruitful discussions that lasted close to four hours and bringing together over 80 participants from 20 branches of NSODA, resolved as follows: