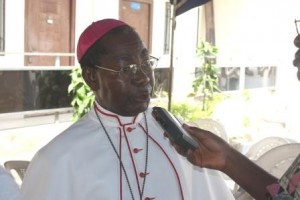 Dear brothers and sisters in Christ,

The Need for a Second Major Seminary
2. Within the last few years, the Bishops of the Ecclesiastical Province of Bamenda have been wondering whether to continue to take more candidates, thereby enlarging the infrastructure of the seminary, or to start another major seminary to accommodate the growing number of candidates from our Province, not to talk of those coming from elsewhere. We, the Bishops of the Ecclesiastical Province of Bamenda, have decided to start a second major seminary for our Ecclesiastical Province. We could also have divided the existing major seminary into two campuses-a Philosophicum and a Theologicum- but the idea of a seminary with Philosophy and Theology together favours a better follow-up of the candidates. We consider this a better option because it favours a better formation of the candidates instead of having large numbers in one place. Either case would require an increase of infrastructure and personnel.

The Name and Location of the New Seminary
3. The new major seminary will be dedicated to Blessed Pope John Paul II, who will be canonised in April 2014. It will be located in the Diocese of Mamfe. The Right Rev. Francis Teke Lysinge, Bishop Emeritus of Mamfe, and his successor, the Right Rev. Andrew Fuanya Nkea, have generously put at our disposal the structures of Blessed John Henry Newman Spiritual Centre Bachuo Ntai as the temporary site of the new seminary. Considering the necessity of expansion of the new seminary, the temporary site is not big enough. We are grateful to His Royal Majesty Senator Nfor George Tabetando of  Bachuo Ntai who has graciously put at the disposal of the Bishops of the Ecclesiastical Province of Bamenda a 10-hectare piece of land for the establishment of the new seminary.

When to Begin
4. Our Provincial Episcopal Sub-Commission for Priests and the Formation of Priests has already been doing a lot of groundwork in preparation for the new seminary. We have therefore decided to start the new seminary in the 2014/2015 Academic Year. The first batch of students in the First Year of Philosophy will therefore be admitted in Bachuo Ntai in September 2014. The candidates will come from St. John Mary Vianney Spiritual Formation Centre Bafut and from Blessed John Henry Newman Spiritual Centre Bachuo Ntai. In due course the new seminary will also have its own spiritual formation centre.

The Need for Financial Resources
5. The Church in the Ecclesiastical Province of Bamenda has known and cherished the tradition of Christ’s Faithful praying earnestly for vocations and supporting the seminary to the best of their ability. St. Thomas Aquinas’ Major Seminary Bambui has developed and survived thanks especially to the moral, spiritual and financial support of the different categories of Christ’s Faithful in the Ecclesiastical Province of Bamenda. From the beginning of this new seminary, we would certainly need a lot of funds both for the structural adjustment of the temporary accommodation and for the subsequent construction of buildings on the permanent site.

6. That is why we have decided that special collection be taken in all churches, public and semi-public oratories of the Ecclesiastical Province of Bamenda on the Third Sunday of Easter- May 4, 2014. This collection shall be for the modification of the present infrastructure of Blessed John Henry Newman Spiritual Centre Bachuo Ntai to accommodate the new seminary. It does not replace the customary Major Seminary Collection taken every year on August 15, Solemnity of the Assumption of the Blessed Virgin Mary.

An Appeal for Moral and Spiritual Support
7. We hereby earnestly appeal to all the Priests, Men and Women Religious, and all members of Christ’s Lay Faithful in this Ecclesiastical Province to pray for the success of this project. We also appeal to them and especially to the elite of the dioceses of our Ecclesiastical Province and all men and women of good will to donate generously towards the realisation of this all-important project.

Conclusion
8. We render immense gratitude to God, the eternal Shepherd, who never leaves his flock untended, for the growing number of vocations. We are deeply indebted to all our Priests, Men and Women Religious, the Lay Faithful, the Congregation for the Evangelisation of Peoples, benefactors and men and women of goodwill for their marvellous assistance in the formation of our diocesan Clergy. We pray that the Lord of the harvest may bless and reward all of you abundantly. May the Blessed Virgin Mary, Queen of the Apostles, and Blessed John Paul II, Patron of our new seminary, intercede for us. Amen.

Given at Bamenda,
Saturday, 22 February 2014,
Feast of the Chair of Saint Peter, the Apostle.

“We have had a good tradition in Bambui and we are going to maintain it in Mamfe,” BAPEC President, Archbishop Cornelius Esua