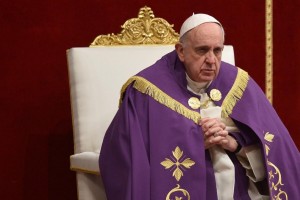 It is very common to celebrate anniversaries especially the first, 5th, 10th etc. People turn to focus more on round birthdays for various reasons known to them. Only a few exception would go for normal anniversaries like the 2nd, 3rd, 4th, 6th etc. Pope Francis is one of those few exceptions.  Today clocked exactly 2 years since the papal throne fell into the hands of this Argentinian Christian. 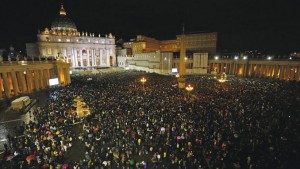 This present Pope has faced a lot of challenges, with many disagreeing with his approach to humanity. Most of the criticisms come from his own cardinals who have made work more challenging to him. If there is one thing to emulate from this pope, it is about humility. Some cardinals will not understand why he would insist they live a poor life when they have been walloping in wealth.

As if that was not enough, the present pope rejects the title “Holy Father” and accepts the “Bishop of Rome” stating that holiness is reserved for those who have died and found worthy by the church to be called Holy. 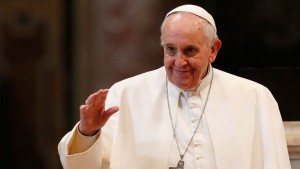 That is why he dedicated his 2nd anniversary as a pope breaking the tradition of popes writing to his college or cardinals and writing directly to the faithfuls to join him during this 2nd anniversary to pray or hold a vigil for him. All over the world today, catholics are holding one form of vigil or prayer for the Pope.

According to Vatican City (AFP) – Pope Francis marked the second anniversary of his election on Friday by giving an interview in which he says he expects his time at the Vatican to only last for another two or three years.

“I have a feeling my pontificate will be brief,” the 78-year-old told Mexico’s Televisa channel.

“Four or five years, I don’t know. Two years have already gone by.

“It is a vague feeling I have that the Lord chose me for a short mission. I am always open to that possibility.”

This would mean that he does not expect many more anniversaries and maybe the need to celebrate now.

Angus MacKinnon of AFP goes further to state that Pope Francis today marking the second anniversary of his election declared a jubilee year that will be interpreted as a powerful signal of his commitment to reforming the Church.

“The extraordinary holy year, dedicated to the theme of mercy, has been called to celebrate the 50th anniversary of a groundbreaking Vatican council that transformed how the Church related to the modern world, most notably ending the obligation for religious services to be conducted in Latin.

The jubilee year will begin on December 8 and run until November 20, 2016. December 8 is one of the holiest dates in the Catholic calendar as the Feast of the Immaculate Conception and is also the date on which the Vatican II council closed in 1965.”