Yaoundé 17-03-20 Cameroon should stop the war if they truly and honestly want to fight the pandemic in good faith:

Cameroon’s PM announces a shut down without providing solutions to sustain the lives of those whose businesses will be affected: They copy words from the west and paste but ignore that the west provides avenues for survival: The greatest corona in Cameroon will be a crippled economy as many will die after the disaster: Why claim to protect lives when you are killing thousands in Ambazonia? Is it because the cases are found in Yaoundé for now ?

You can’t close restaurants, bars, transportation etc without a package to keep these firms alive at least for the time being; yet you still send soldiers with tax payers money to kill civilians in Ambazonia daily ever since the pandemic started: The soldiers are killing 50 times more than the virus ?

Stop the war and divert the resources to livelihood and you will come out with a win- Win situation : Other African countries can shut down their countries and survive but Cameroon ?? can not because of the war and killing of tax payers and workers :
All the countries Cameroon would expect aid from are affected by the virus and as such they should not think they will manipulate them with Boko Haram to get assistance this time around to kill southern Cameroonians with : Shey Tatah.

The Cameroun forces invaded a village in Bui county known as Tatum in the Nkum LGA looting, burning and abducting nurses in a clinic:

Tatum- Nkum LGA & Mbonso- Mbiame LGA all in Bui County have been under La Rep’s Military invasion : Last evening Friday 20-09-19, they looted; and abducted nurses on duty in a clinic in Tatum :

They as well killed at least in Mbonso a village under Mbiame LGA invading the village and we reported more la Rep forces came in from the western and Adamawa regions through Lip:

Serious gun battle now in Santa following the road block this morning as la Rep forces are battling with the restoration forces : Two Tankers with fuel reportedly visited by the consortium of fire ?: we await the updates: Scandy Media 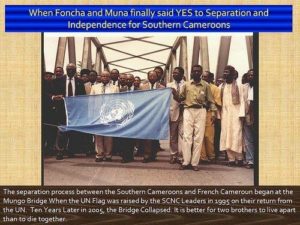 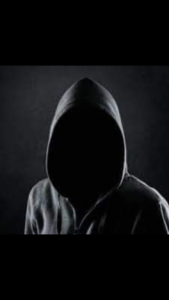 There is not doubt that SDF maintains as the main leading opposition party in Cameroon with its party leader as the only opposition leader who has stood the test of time as far back as the early 90s. Today, the popularity of this charismatic leaders has experienced a drastic decline. Is he on his way down to ruins?  what could be the causes for the popularity loss of the party chairman. 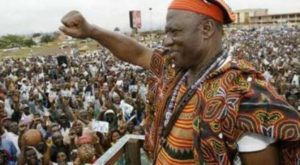 When one looks at the iamge above, one will agree with this write that, no even, no political leader/event has ever pulled a crowd with one goal as the SDF did in the 90s with its party chair. When they won the elections in 1992 and refused to get to the parliament, many asserted this was the first major blunder of the chairman as they gradually gave the majority and influence to the ruling CPDM. 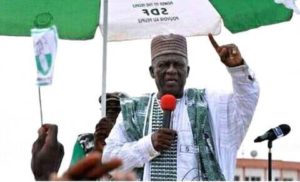 The chairman continued in his struggle and quest for leadership both as party chair and declaring his candidature for the position of the head of state up till date. His challengers especially in the pary have been either replaced or excommunicated from the vice presidents and group presidents/secretaries. This aspect exhibited by the chair earned him the title of a dictator not different from President Paul Biya. 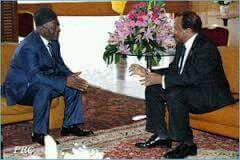 During the 50th Anniversary of Independence and the celebration with the military in Bamenda when Fru Ndi came face to face with the President, things took a U-turn. Many concluded that the chairman was bought as he constantly visited the Unity palace, discussed with the president and skillfully stood against many demonstrations that planned in the name of peace. The Unity palace surely rewarded him handsomely. 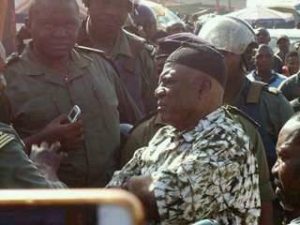 The on going Anglophone crisis has been a big challenge for the SDF chairman, he has been unable to directly state where he belongs. Is he an Anglophone fighting for the Anglophones’ plight or a Cameroonian fighting for social Justice. Is he an opposition leader who wants to take over the command baton from Paul Biya or someone playing a double edge sword role to stand stand victorious on whoever wins. While the Anglophones are asking for a two state federation, he is asking for a four state. Where really does he belong? 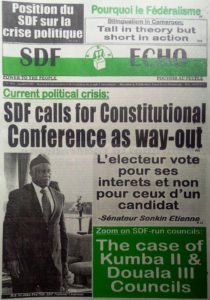 The fact that SDF in the midst of the Anglophone crisis went ahead to admit  Sen Jean Tsomelou as the Secretary General of the party brought a lot of discontent amongst many Anglophones who easily tagged the chairman as a traitor. Although he defended that SDF stands for Federalism and not secession. Ewi Elvis on the 14th of January in the “We Love You Bamenda” forum tried as much as possible to explain the position of the chairman and SDF stating that people may often not understand the choices of the party, and that except that we want to conclude that SDF is an All Anglophone party, one should look at the position of Jean Tsomelou in the first place. He adds that Tsomelou as a senator defends the truth more than any in the party and that his role would be a boast to the Marginalization fight. Tsomelou stands as one who always advocate for a walk out when CPDM stands on useless reforms. He defended the demonstrations at the parliament and stood behind the SDF match in Buea. This explanation bought the sympathy of many like princess Nene who added that she was not an SDF member but reiterated that an opposition party could not be an Anglophone party. “The Chairman happens to be an anglophone and it is more advantageous for us to use him for the struggle, he should explain things better to the people, ” Princess Nene added. 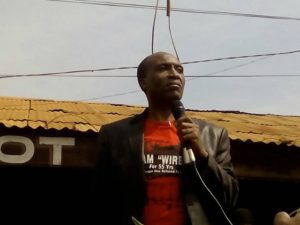 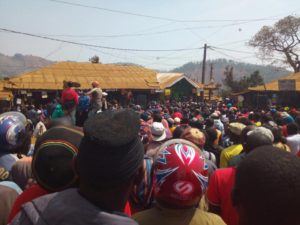 It is true the chairman has been unable to state clearly where he belongs. When the struggle started, one could conclude that as an anglophone, he stood for the anglophones. He went to Governor many times and to the cells to get many of those arrested freed. He joined the match in Buea but the new year has brought the chairman under fire.

After the planned NEC meeting to excommunicate Hon. Wirba Joseph for his bravery on the National Assembly, Fru Ndi later lashed on his actions which expressed some acts of “jealousy” for a patriotic MP.  The letter Wirba later exposed which he wrote to his chairman addressing him as a father made many lose confidence in SDF chairman. His refusal to protect his son and went to the media to question him was a big blunder on the part of the chairman. 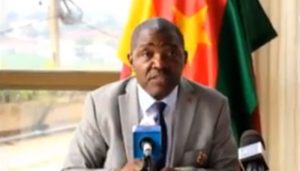 Today and sad enough, the one who stands to defend the SDF MP Hon. Wirba is paradoxically an MP from the south a CPDM militant Martin Oyono, one who has nothing to do with the Anglophone crisis but stands as an upright MP who wants to see true change in Cameroon. Right now as we write, he is being interviewed on CRTV as questioned why? He states clearly that someone has to do it and that those of them who represent the minds of the people and refuse to vote for the CPDM bad reforms are referred to as Radicals. He has taken the role that should have been played by the SDF chairman and his MPs to state clearly that he “Will Resist Attempts to Lift Immunity of Wirba Joseph”  said Hon. Martin Oyono 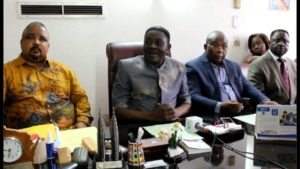 The clarion and challenge call by Oyono Martin has pierced a painful hole in the hearts of the SDF MP to obliged them take the opposite side against their chairman Fru Ndi. This solidarity if practiced all through might be the one that can put an end to the close to 30 years rule of Ni John Fru Ndi. The SDF MPs did not only in their 3rd position statement this time addressed to the Speaker of national Assembly, asked the speaker to provide and protect the immunity of Hon. Wirba to permit him return to the country and perform his duties as an MP.

According to a Press Conference held yesterday in Yaoundé Tuesday April 11, 2017, “Hon Jospeh Mbah Ndam, Vice President of SDF Parliamentary group urged House Speaker Cavaye Yege to ensure that Parliamentary Immunity of Hon.Wirba is not tampered with. He also read out that the House Speaker should protect the escapee and make sure that he returns home without being arrested.” CIN

The question is, If Hon. Wirba spoke the minds of the people and is being lashed by the SDF chairman, then on whose mind is the SDF representing now?

“Hon. Mbah Ndam flanked by other MPs including SDF National Vice President, Hon. Joshua Osih, reiterated their support for Wirba saying that he spoke their mind on the fateful day last November when he spoke on Anglophone marginalization.” CIN

With the SDF MPs asking for the return of Hon. Wirba to his position, does it mean that the call by the Anglophones for the SDF MPs to resign has fallen on deaf ears? Are they willing to fight for the people they represent? Is the interest of being an MP more important to that of liberating the people? If Hon. Wirba were to return home today, after asking the MPs to resign and leave the Glass house for the people, who will he return home as? MP? Freedom fighter? West Cameroon president?

With the SDF chairman asking of what use should the SDF hold elections when the anglophones are on strike, is giving the impression that he is either using the struggle to stay in power or is not willing to handover as the SDF chairperson. If the Anglophone crisis is so important to him, then why is he not able to heed to the call by the Anglophones by boycotting the events organized by the Regime in power. The chairman was spotted during the funeral in the West region of Chantal Biya’s mother, an event that was boycotted by the Presidential couple. How can one mourns more than the bereaved?

During the tour with the CAF cup, the same chairman despite all calls for boycott by the Anglophone leaders, Fru Ndi was again spotted at the podium, a repeat of his trip to the unity palace when the Lions were being received by the head of states. These actions and more have pushed many to conclude that Fru Ndi works as a CPDM agent in the anglophone zones. Is it time for him to go?

Only time will tell.